A genuine smile by showing your teeth has always been extremely important for the first impression. Going for the teeth whitening has never come across my mind until lately I realize my teeth getting yellowish and it’s so obvious when I put on my red lipstick. As a result, I decided to go all the way with LED teeth whitening for a quick and non-invasive procedure with True Aesthetics. I bought the trail package for 2 sessions under True Aesthetics from FAVE (previously known as Groupon) and it costs me about $128.

LED teeth whitening is a non-invasive procedure that involves coating your teeth with a whitening gel to bleach out the stains and blemishes in the enamel before LED light is used to activate it for 40mins. The gel will react with existing stains and breaks down the chemical structure in order to light down the shade up to 8shades.

Hydrogen Peroxide (HO2) is the main ingredient used widely for the teeth whitening procedure. It’s the strongest bleaching agent for the faster and stronger result that has been chosen mostly by the professional. Non-peroxide teeth whitening usually mean using home remedies such as bicarbonate soda to whiten the teeth. It usually requires daily application over a month to show the result.

Just to share with all of you, I’m not a coffee lover, however I have the habit of drinking green tea early in the morning and occasionally sip some red wine that definitely will cause some stains and yellowish onto my teeth. After filling up some information at the counter, I was led to a treatment room greeted by a comfy couch and immaculately folded towels. I ws given a Bleaching Shade Guide to find out the shade of my teeth and mine is falling under S22.

Before the procedure begin, I was given a Deep Cleaning Teeth Wipe to brush my teeth with the finger. 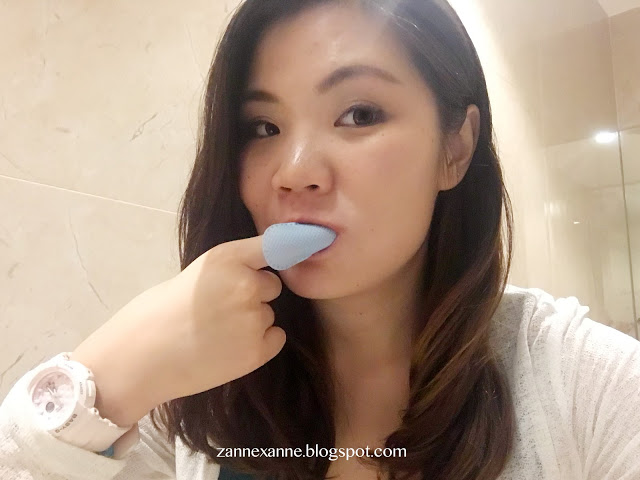 After that, I was given a blue mouth guard to wear in order to expose my both rows of teeth to the LED light. I feel a little discomfort at first because it’s big and it took me some time to expand my mouth. After putting on the sunglasses for LED light, my aesthetician gently applies the protective gels onto my lips and gum before she began to apply the whitening gel to my teeth. After 2 rounds of 15mins treatment with the gel being topped up in between, my shade has dropped from S22 to S12 which mean 10 shades lighter!

I experienced some slight teeth sensitivity toward the blue light due to my weak gum. I’m having some numbness sensation on my teeth as well for the next day, hence remember to have something light for your next day’s meal after the whitening procedure if you have a sensitive gum like me. However, some people who have a stronger gum do not encounter this issue. Overall, I’m still satisfied with my outcome as the result is fast and effective! I never thought that LED teeth whitening can be so effective and I get to see the difference within an hour!

Putting on a white wedding gown can be pretty excited to look forward to. Endless...

Have you ever thought of taking a thrill and excited ride to cross over from...

Time flies and my last Bali’s trip was a year ago, I really missed Bali...

Taiwanese and travellers alike are particularly fond of camping while touring the island. Moreover, Taiwan...

Finding a place for supper after midnight is struggling especially you are not staying in...